Government Spending – How it Impacts You

Home / Beans Blog / government / Government Spending – How it Impacts You

When we hear debates on spending cuts or tax increases needed for the government, it’s sometimes hard to grasp the issue.

The only way to get a grasp on what’s possible and realistic is to look at historical numbers. After all, when I see that we’re spending taxpayer dollars to continue funding Anthony Weiner’s $1.2 million pension it gives me good reason to take a closer look.

What if I told you that about 50 cents of every dollar you earn goes to the government?  Would that bother you?

By my calculation, based on the data provided by the US Department of Commerce Bureau of Economic Analysis, taxes in 2009 and 2010 consumed more than 50 cents of every dollar of our GDP. I did this by adding the data on federal expenditures to the state expenditures and dividing the sum of those two by the annual GDP. 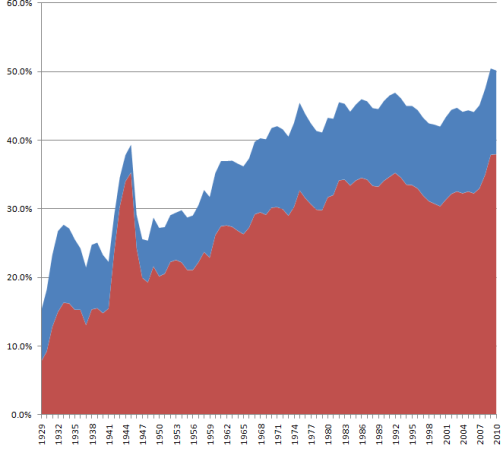 Just for fun, I went back to 1929 (the first year they provided such data) to see what the trend looks like.

What can clearly be seen from the numbers is that the government is a bottomless pit of spending.  Left unfettered, it would move itself to the 100% of all income model.  Remember all the people in government, including lawmakers, have more of a pie to split as more resources are taken from private industry (aka – us).  There’s no incentive to stop shifting money, power and resources to themselves.  What federal government employee wouldn’t vote for his own pension at the expense of a private citizen’s ability to save for their retirement?   Government employees also vote for estate (death) taxes to fund contracts or jobs for their relatives, at the expense of you taking care of your relatives.  You get the point.  The only way to ever control it is to give them a hard and fast budget.  If it’s 15% or 20% of the GDP, I do not really care.  It is likely too high, but it won’t hold us back.

The only reason more people are not freaking out is because the pain has been hidden from us in the form of national debt (aka – credit card).  We haven’t paid for what we have spent yet, so people have had the benefits without all the pain.  That is coming to an end as less people are willing to fund our national debt and we are no longer able to sustain interest payments.

No matter how I slice it, government spending needs to be cut in more than half and maintained at that level over the long haul.  No politician in either party is even coming close to what we really need to do.  I hope they do before we get into a really really bad situation.